Data on Bike Parking in Barcelona

October 13, 2021
Urban on-street bike parking might have been an afterthought in the past, but increasingly cities will need better data on who, when and how residents are using on-street bike parking facilities. Which neighbourhoods are at capacity? Which areas need more facilities? What is the temporal dynamics and diurnal-noctural fluctuations? Where are the conflicts between pedestrians and illegally parked bicycles? Where are spots occupied by private bike-share programs? What about scooters? Or abandoned bikes? And what about kid bikes? How present are they in the urban cycling mix? And on average, how long do bikes stay in the on-street spots? Are they for day use? night use? or long term use? In this post I present some preliminary data with research conducted with Sofie Dejaegher, Esteve Corbera and Victoria Ortega, on urban on-street bike parking in Barcelona, with data collected between February and July 2021. Our journal article will come out later, but here are a few illustrative figures that start to tell the story of what we are seeing from our field data.
First, we see that Gràcia and Ciutat Vella (Old City) have the highest average occupancy. This is the average occupancy of all the bike parking sites (punts d'ancoratge) in our sample plot, so the average of 81% occupied in Gracia means most sites in Gràcia close to capacity and several were over 100%.  Ciutat Vella is the other neighbourhood with symptoms of an on-street bike parking problem, as it showed an average occupancy of 74%. The districts of Sant Marti, Eixample and Sants all show high use as well.
And this is what the data looks like when you map it. 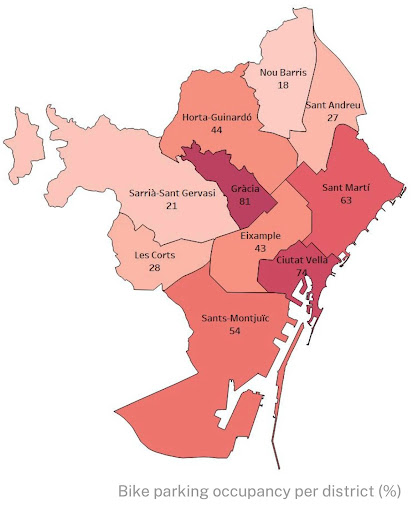 The map shows us that there appears to be more bikes along the two central axis of the city (Old City to Gracia + Coastal axis), with the periphery having substantially less use. Interestingly, the two ears of the city (Les Corts & Nou Barris) have the opposite socio-economic status, so what explains on-street bike parking probably has more to do with geography and topography than income.
If we only look at the number of total spots available in our sample plots, we can infer that bike parking is not distributed evenly throughout the city. Neighbourhoods with high use have many more spots. But we also see that Eixample has more spots, even though Gracia has higher use. So high occupancy correlates with infrastructure availability, suggesting that the city is being responsive to demand, but there still appears to be unmet demand in Gràcia and Ciutat Vella.
What sort of bikes did we find in the bike racks? Is it true that bike racks are being overwhelmed by the shared bikes from private companies? Well, at a city wide scale, that does not appear to be the case. However we should be careful to note that a district wide analysis may hide intense use at particular sites.
We see lots of children bikes in Sant Marti and Ciutat Vella, and to some extent in Gràcia and Eixample. In some cases, we sensed that the children bikes were being parked for long term storage in the on-street facilities, but in other instances it was inspiring to see that kids were really using the on-street parking for day use, indicating that children and parents feel safe enough to bike the city.
This project is just the beginning of more work on bike parking in Barcelona. We hope to contribute to this issue with new data, since until recently, no one even bothered to examine occupancy rates and use of this critical cycling infrastructure.  This issue is also timely, coming on the heels of the CicloBCN21 conference and has been picked up by Michele Catanzaro from El Periodico, who has written a thoughtful feature article using some of our data as the entry point to the topic.
I will end with a few photographs from our field work throughout the city. 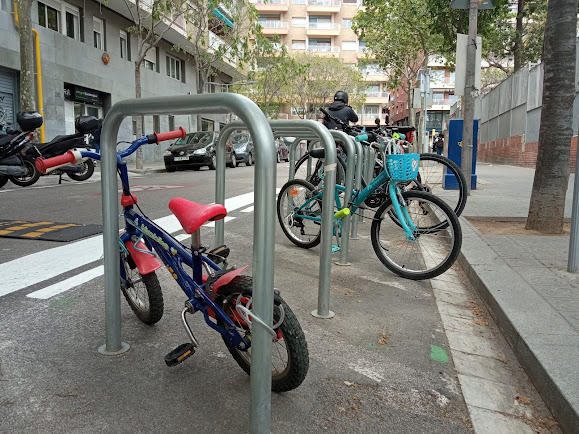 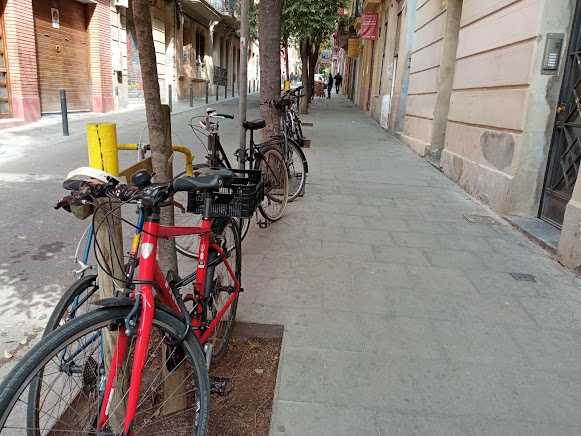 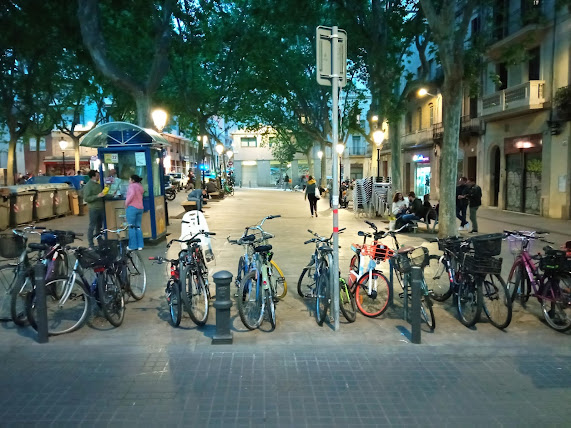 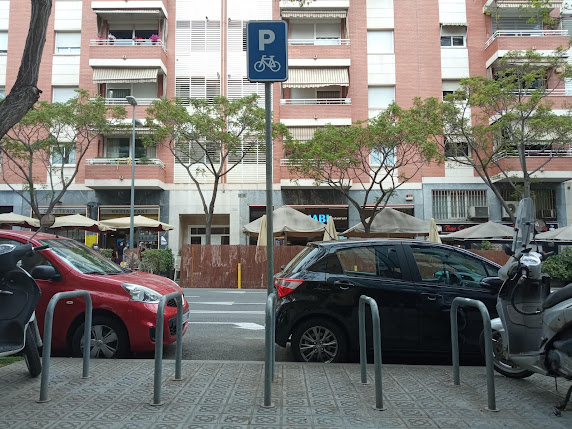 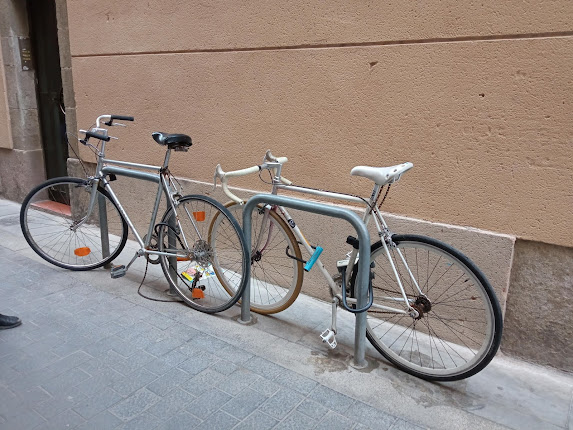 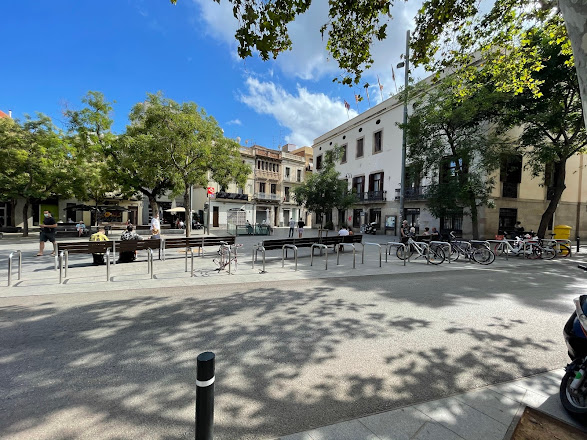 We found several spots that had a very large capacity, especially near transit stops or schools. These are probably designed to cover peak hours. Photo in Sant Andreu, Barcelona. 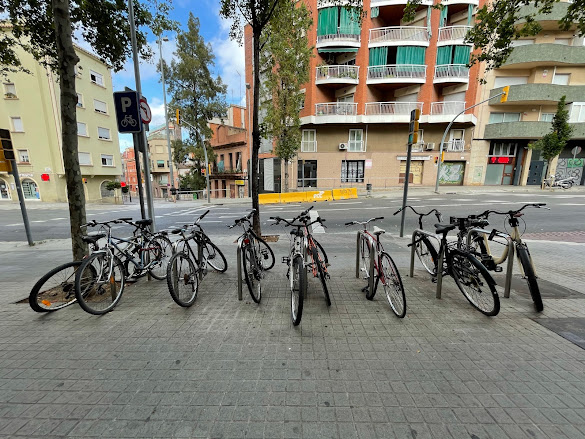 Popular posts from this blog

March 04, 2021
The city of Barcelona has made an important step in their journey to become a greener city . The Mayor Ada Colau and her team announced the winners of the Superilla Barcelona  design competition for the street re-design of four streets in the Eixample grid: Consell de Cent, Compte Borrell, Rocafort and Girona - and the conversion of four vehicular intersection into green plazas. The protagonist of this transformation is Consell de Cent , a street 2.8 km in length aiming to be the pioneer green corridor, and the test be of ideas for a much wider transformation. With a budget of 37.8 million Euros, the immediate goal is to complete the green corridor on Consell de Cent and the four plazas by February 2023 - and yet the ambition is clearly wider.  As illustrated by the name of the project, Superilla Barcelona , this is not to be a one-off city greening project, rather they are talking about a new urban model for Barcelona's Eixample district, and a full overhaul of what it feels like
Post a Comment
Read more

September 18, 2021
Photo credit: Patricia Alvarez @patalgar  The image of kids riding their bike to school in a big city is highly inspiring. Kids on bikes. Together in a group, going to school. Pedalling together along city streets, each on their own, yet together in unison.  Yesterday we saw images of the first Bicibus in the Eixample grid of Barcelona (see here  or here ).  You can think of BiciBus as a sort of critical mass for kids going to school. This was not the first Bicibus in Barcelona, that honor goes to the group in Sarrià, and yet the first group in the Eixample somehow feels like a turning point. If we can insert kids on bikes here, we can do it anywhere.  @BicibusEixmaple is an experiment that we should all be watching closely. Until recently, most #BiciBus projects have been in smaller towns, with bikable streets and distances that are amenable to cycling school commutes for kids and parents. In the suburbs, one can imagine asking kids to bike to school together in a group t
Post a Comment
Read more

The Gender Gap in Urban Cycling

March 25, 2021
What is the  gender gap in urban cycling and why is it a key indicator for an equitable and just city? We know that improving cycling infrastructure has become an essential best practice in urban planning - to reduce carbon emissions, to improve health, to slow the city down, to reduce air and noise pollution. But does everyone benefit equally from new bike lanes? If the dominant users are white males, are city investments reinforcing gender inequality? How do we estimate the proportion of female cyclists and bike lane users in a city and what can be done to reduce gender differences? What would a cycling network look like if it were designed by and for women? What types of bike lanes are better for women?  If planners were to incorporate a feminist perspective in the design of new cycling infrastructure, what would this look like? Thinking about gender equity in urban cycling policy and design opens a whole range of questions that urgently need to be addressed to create an equitable
Post a Comment
Read more